Give Us A Call

The company’s first logo, which was adopted in 1893, reflected its connection to Mitsui Bank. Ten years later, as the company was renamed from Tanaka Seizo-sho to Shibaura Seisaku-sho, it introduced another emblem featuring the character for “Shiba”. 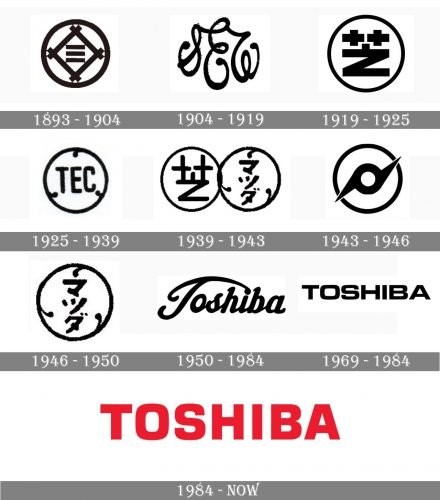 The history of Toshiba dates back to the end of the 19th century when the colony was established under the name Shibaura Seisaku-sho, and since that time it changed its name two more times before stopping in Toshiba in 1950. As for the visual identity, for the first fifty years of the company’s existence, it was redesigned six times and always featured interesting abstract badges with geometric drawings or stylized hieroglyphs on them, and only in the 1960s, the brand started using a simple wordmark as the primary version of the logo.

The original logo was designed for Shibaura Seisaku-sho in 1983 and boasted a circular badge with a rhombus in it. Inside the rhombus, there were three parallel horizontal lines. The emblem was executed in black and placed on a white background with the lines of the circle and the rhombus featuring the same thickness.

The stylized geometric logo was replaced by an elegant cursive monogram in 1904. Three curved smooth letters were written in black and connected with their elongated lines, emboldened in their ends. 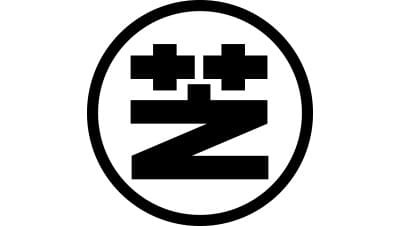 The redesign of 1919 brought back the circular badge, but changed the inner part of it, placing the “Z” line symbol on its bottom part and two solid crosses above it. The image looked strong and confident, evoking a sense of expertise and authority. 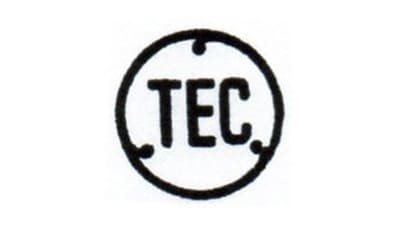 The Tokyo Denki or Tokyo Electronic Company was established in 1925, with its emblem introduced in the same year. The badge also featured a black circular frame but the abstract symbols were replaced by the “TEC” inscription executed in a bold rounded sans-serif typeface. Three rounded short lines were coming out of the circular frame to the center of the emblem. 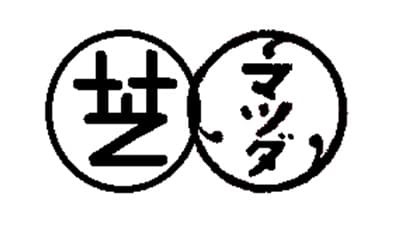 In 1939 Shibaura merged with TEC, forming Tokyo Shibaura Denki, and the new emblem was created, basing on the emblem of both brands. The logo for the new company was composed of two monochrome circles, which were slightly overlapping. The left circle had a “Z” with two crosses inside, and the right one — a vertically oriented inscription in Japanese.

The new logo was designed in 1943, and it was a very minimalist and sharp emblem, composed of a shut Ikra image, enclosed into a circular frame. Though the badge stayed with the brand for only three years, it was one of the most modern and stylish badges in its history.

In 1946 the logo of the company was changed again and now it featured just one circle, which was placed on the right of the previous emblem, the vertically placed Japanese inscription in a rounded frame with three rounded curves coming out of the frame to the center.

The name of the company was changed to Toshiba in 1950, and the new insignia was introduced. It was a cursive smooth lettering in black with the horizontal bar of the letter “T” elongated and arched, covering the other letters as an umbrella. It was an elegant and sleek logotype, which was used by the company for almost three decades.

In 1969 another version of the Toshiba logotype was created. Written in all capitals of a square sans-serif typeface with clean strict shapes and lines. The typeface of the new logo is Microgramma Bold, modern font with a strong and confident sharp yet. This version of the emblem was available in a monochrome color palette and still can be seen on some of the brand’s products.

The redesign of 1984 brought a new bright image to the Toshiba visual identity, coloring its logotype in red and changing its typeface to a more narrow and solid sans-serif, Eurostile Bold.

The original Toshiba wordmark sported a beautiful italic script, yet later the company switched to a simpler, easy-to-read design.

Since 2002, the main color of the Toshiba logo has been red. Below the red wordmark, the “Leading Innovation” tagline is given in black.

One of the most known old Toshiba symbols is a black script logo. Here, the name of the company is given in a cursive font resembling handwriting. The most recognizable of all the letters is the initial “T.” Its upper bar, which is actually more of a curve here, stretches to the right and covers half of the word.

*The above content and information has been derived from various online sources and is purely for information purposes. This content is not owned by this website.

Request a Quote
We use cookies on our website to give you the most relevant experience by remembering your preferences and repeat visits. By clicking “Accept All”, you consent to the use of ALL the cookies. However, you may visit "Cookie Settings" to provide a controlled consent.
Cookie SettingsAccept All
Manage consent

This website uses cookies to improve your experience while you navigate through the website. Out of these, the cookies that are categorized as necessary are stored on your browser as they are essential for the working of basic functionalities of the website. We also use third-party cookies that help us analyze and understand how you use this website. These cookies will be stored in your browser only with your consent. You also have the option to opt-out of these cookies. But opting out of some of these cookies may affect your browsing experience.
Necessary Always Enabled
Necessary cookies are absolutely essential for the website to function properly. These cookies ensure basic functionalities and security features of the website, anonymously.
Functional
Functional cookies help to perform certain functionalities like sharing the content of the website on social media platforms, collect feedbacks, and other third-party features.
Performance
Performance cookies are used to understand and analyze the key performance indexes of the website which helps in delivering a better user experience for the visitors.
Analytics
Analytical cookies are used to understand how visitors interact with the website. These cookies help provide information on metrics the number of visitors, bounce rate, traffic source, etc.
Advertisement
Advertisement cookies are used to provide visitors with relevant ads and marketing campaigns. These cookies track visitors across websites and collect information to provide customized ads.
Others
Other uncategorized cookies are those that are being analyzed and have not been classified into a category as yet.
SAVE & ACCEPT